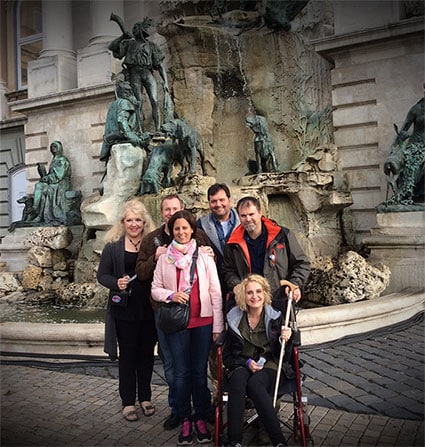 Marj, Dáni, Kata, Scott, Chris, and Hannah on the grounds of the Royal Palace, Budapest October 2014

The Escape Room Indianapolis was created by Scott & Marjorie Neal after returning from a European tour in the fall of 2014. While on vacation there with friends, they stopped off in Budapest, Hungary to visit other close friends. This was their third visit to Budapest as it had become their favorite European city. One night during their stay, their group of five visited a place called Exit The Room near downtown Budapest. It was an escape room attraction, and the number one tourist attraction in all of Budapest, so they just had to try it. As you can imagine, none of them had ever heard of anything like that before. They were very intrigued and excited about their evening and they showed up not really knowing what to expect.

Upon arrival, they were informed of the rules and then locked in the room. They were given absolutely no clues or hints prior to entering the room, so they had to use all of their collective wits right from the beginning! After a few short minutes, reality quickly faded away and they were completely immersed in the experience. One clue after another. One key after another. One combination after another. The clues seemed endless and all the while the clock kept ticking. Tick-tick-tick! Unfortunately, after sixty brain-racking minutes, they failed to get out of the room, but they had the best live entertainment experience of their lives!

After returning from Europe, Scott & Marjorie thought that the escape room scenario just might work in Indianapolis. After extensive internet research, Scott was pleased to discover that, while prevalent throughout the world and the United States, there were no escape room companies operating in Indianapolis or the state of Indiana. Taking a giant leap of faith, Scott & Marjorie invested all of their savings and formed The Escape Room LLC on October 14, 2014. Scott spent the next four months tirelessly writing an extensive and thorough business plan, all the while searching for the perfect location in downtown Indianapolis in which to open the business. Slowly, over the following months, the business took shape.

To increase working capital and solidify the business, veteran Indianapolis businessmen Brendon Harbron, Daniel Chillemi, David Bartz, Marc White, and Richard Farkas joined the LLC in July 2015. After many months of searching and prolonged and tenuous lease negotiations, they finally found the perfect location for their venture and the rest, as they say, is history! To share their love of Budapest and its inspiration to their business, Scott & Marjorie have adorned The Escape Lounge with pictures of their favorite European city.